Average price of home in capital is £471,761, down 0.6% between July and September compared with same period last year.

Article from the Guardian

London house prices fell for the first time year-on-year since the height of the financial crisis eight years ago, underperforming the rest of the UK, Nationwide has said.

The average price of a home in the capital is £471,761, down by 0.6% between July and September compared with the same period last year. It was the first drop since the third quarter of 2009, when the UK economy was dealing with the aftershocks of the near-collapse of the global banking system.

London was the only region in the UK where prices fell over the third quarter, making the capital the weakest-performing region for the first time since 2005. On a national level, house prices rose 2.2% to £210,982. East Midlands was the strongest performer, with prices up 5.1% at £177,825.

While London house prices remain easily the most expensive in the UK, Robert Gardner, Nationwide’s chief economist, said the gap between house price growth in different regions was closing. “House price growth rates across the UK have converged in recent quarters,” he said.

“Annual growth rates in the south of England have moderated towards those prevailing in the rest of the country. London has seen a particularly marked slowdown, with prices falling in annual terms for the first time in eight years.”

Analysts said that a combination of unsustainable growth in prices, higher stamp duty on second homes – which has affected the London market more than any other region – and Brexit fears, were all weighing on London house prices.

Weakness that began with London’s most expensive homes in central London appears to be rippling through to the capital’s outer boroughs, taking prices towards what analysts said were more realistic levels.

“The softening of prices was initially led by the capital’s prime market, which was knocked sideways both by Brexit and in the wake of the introduction of higher rates of stamp duty for high-value homes. But it is now spreading from the central boroughs – which saw prices rise fastest during the boom – to other areas where the growth came later.”

Jeremy Leaf, a north London estate agent and former residential chairman of the Royal Institution of Chartered Surveyors, said people selling homes in the capital were having to price their properties more realistically to close deals.

“[The Nationwide report] shows the north-south divide in reverse and confirms what we have been seeing on the ground – that the London market is struggling for mainly affordability reasons and it is only those sellers who recognise the changed market conditions that are doing deals,” he said.

Nationwide’s Gardner said that in the UK overall, house prices were being propped up by low mortgage rates, high employment and a shortage of properties on the market, but added that pressure on household incomes was starting to weigh on confidence.

In recent weeks, Bank of England policymakers have signalled that they were nearing the point of raising interest rates for the first the time in more than a decade. Rates are at an all-time low of 0.25%, and economists believe the monetary policy committee could vote for an increase to 0.5% as early as November. 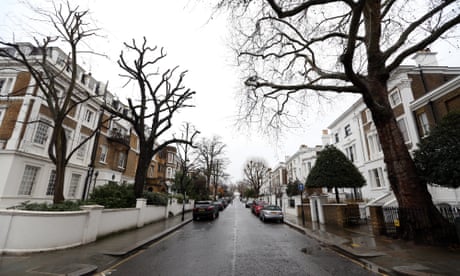 Gardner said a small rise in rates would not put excessive pressure on homeowners, partly because a smaller proportion of people were on variable rate mortgages that would be most affected by a rise in interest rates.

“Providing the economy does not weaken further, the impact of a small rise in interest rates on UK households is likely to be modest. This is partly because the proportion of borrowers directly impacted will be smaller than in the past,” he said.

“In recent years, the vast majority of new mortgages have been extended on fixed interest rates. The share of outstanding mortgages on variable interest rates has fallen to its lowest level on record, at about 40%, down from a peak of 70% in 2001.”

In September, UK house prices edged up 0.2%, after a 0.1% dip in August. On an annual basis, prices were up 2% compared with September last year.

“The fundamentals for house buyers are likely to remain weak over the coming months with consumers’ purchasing power continuing to be squeezed by inflation running higher than earnings growth,” said Howard Archer, chief economist at the forecasting group.

“Additionally, housing market activity is likely to be hampered by fragile consumer confidence and limited willingness to engage in major transactions.”

Article from The Guardian

$260 Million Chunk of Hawaii's Molokai Island on the Market